To get list of themes on a Drupal site programmatically, please use following code:

To get list of modules programmatically, please use following code:

We can get Drupal 8 version using Drush also.

drush st as a shortcut (alias) for

Windows 10: How to open a program on start up?

To open a program(Google Chrome, Outlook) on start up, please follow these steps:
at February 16, 2022 No comments:

Email ThisBlogThis!Share to TwitterShare to FacebookShare to Pinterest
Labels: 10, Start up, Windows

How to make a text unreadable using CSS?

Imagine you are working on a page where you want to blur a text to make it unreadable for Anonymous users.

Please see the example below in the image:

This is achievable using CSS:

That's it. All elements with class class-name will blur to become unreadable.

In Drupal 8, while showing any block, there are visibility settings where, we can select which pages the block can be visible.

The same form has an underlying functionality to hide the block for the selected list or URLs.

Unfortunately, the same is not the case of Roles.

/* Negate the condition to decide visibility of which user roles to show/hide. */

This adds two radio buttons under the form: Roles.

Following is the screen shot for the same: 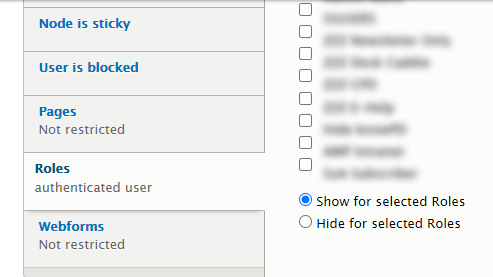 Attention GitHub users: Git will add Token Authentication on August 13, 2021, only Username and Password authentication will not work.

Recently, Github has added strict measures to proivde additional security to its users.

As a major step in this, github is making a Token based authentication mandatory for all Github users from August 13, 2021.

So, mere Username and Password authentication will not work.

Tokens will be generated either for devices or session.

To get list of themes on a Drupal site programmatically, please use following code:   $modulesList = \Drupal::service('extension.list.t...